How To Tell If A Heifer Is A Freemartin

When dealing with twin births in cattle, the freemartin is arguably the most severe anomaly producers encounter. If you are facing the same problem, then you may be asking the question on most herders’ minds – how to tell if a heifer is a freemartin?

There are several ways you can determine if a heifer is a freemartin. The most common one is rectal palpation, which may be performed on a female that is at least 600 pounds or more. Other methods include the use of test tube, blood testing, and physical examination of the udder and teats.

Freemartins are usually born without some or all of the vital organs required for breeding. As a result, they’re mostly infertile.

Given the times we are in, keeping a free martin may be seen as a wrong move. Since they are mostly non-breeders, raising them can incur losses in the long run.

So, the best plan is to identify the freemartins early and separate them from the herd. 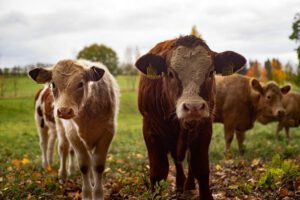 What Are Free Martin Heifers?

Before we delve into the various ways to identify a freemartin heifer, it may help to understand what a freemartin really is.

Studies show that approximately 50 percent of cattle twins consist of a male and a female calf. When the female calf has an underdeveloped genital and reproductive tract, it is called a freemartin.

While a freemartin usually appears like any other heifer, she usually has a lot of male attributes and often resembles a steer. For instance, her clitoris may be enlarged, and take the shape of a small penis with plenty of hair in the vulva region. It is also common for freemartins to have tiny udder and teats, and lack ovaries.

That said, freemartins tend to perform really well as far as general growth and development is concerned. This is probably tied to the effect of the male hormones.

Interestingly, twinning happens to be more frequent in dairy cows at around 10 percent and upwards. On the other hand, for beef cattle, it’s believed to be less than 1 percent (equivalent to 1 in every 200-227 births). So, you’re more likely to encounter more freemartins if you’re into production.

Are all freemartins sterile? Probably, not but most of them are. Studies show that only one out of every 12 heifers born twin with a bull develop normally and breed.

On the other hand, the males usually grow up normal without any fertility problems. Only a few have reduced fertility but not to the point of becoming completely sterile.

Why Does Freemartinism Occur in Cattle?

A freemartin usually occurs due to the sharing of the uterus between a heifer and a bull fetus. In most cases, the placental circulation linking the dam and both fetuses is also shared.

As a result, there’s joint blood circulation, which leads to the transfer of male hormones (specifically, testosterone) from the male to the female. Consequently, this alters the normal development of the heifer’s reproductive tract.

So while most freemartin heifers have a vulva, it’s usually small and underdeveloped. The same thing applies to their uterus, vestibule, teats, ovaries, vagina, and cervix. The heifer also ends up developing a lot of male characteristics and doesn’t normally come in heat.

Sometimes, the symptoms of freemartinism may not be obvious. This usually happens when the co-twin male is aborted very early in the pregnancy. However, for pregnancies that are 60 days old, hormonal transfer from the other fetus will be enough to cause freemartinism.

As earlier indicated, the male twin is usually OK. Only a few of them have reduced fertility.

It is worth noting that freemartin heifers are not always conceived as twins. A possible reason for this is that the heifer was probably conceived as a twin but resorption occurred (male fetus).

How to Tell if a Heifer is a Freemartin

So, what are the signs of a freemartin? How do you determine if a heifer is a free martin? One way to tell if a heifer is a freemartin is by looking at the genital. If the heifer has an enlarged clitoris with loose vulva lips, then there’s a good chance she’s a freemartin.

Some freemartins may also have their genital opening somewhere across the space separating the hind legs; the same place you will normally find a bull’s foreskin or prepuce.

You can also spot a freemartin from the way she urinates. Normal heifers spray urine downward, while certain freemartins squirt straight back. This is a tale sign but it’s still something to be aware of.

On older heifers, a lot of hair around the vulva and very small udder and teats can also be a giveaway.

While all the traits above are good signs of freemartinism, it’s still important to have the heifer checked before concluding.

A test tube test can also be done to screen a young heifer, ideally a month old or less. This is also known as the freemartin probe.

The length of the vagina in normal heifers is usually around 5-7 inches (14cm). However, for freemartins, it’s usually less than 7cm.

For heifers whose vagina is 7 to 14 cm, a blood test can be guaranteed out to ascertain freemartinism.

While this technique is reliable for identifying freemartin heifers, it doesn’t guarantee that the heifer is ok. Further lab testing will be required for this.

You can also use a blood test to determine if a heifer is a freemartin. This usually involves drawing blood from the young calf and sending it to the lab to check for the presence of the male sex chromosome (Y chromosome).

You can get more information from your vet on how to go about this.

If you wish to wait till the heifer is older, then you can have her palpated by the vet to determine if she’s a freemartin. This can be done when selecting heifers for replacement sales or when separating the breeders from non-breeders.

In most cases, the heifer will be 600 pounds or more.

What to do with a Freemartin?

While you may not be able to prevent freemartinism, early diagnosis is important as it can save you some costs, specifically with regards to feeding and development.

Almost nine out of ten freemartins are abnormal. This simply means they can’t conceive and yield milk. It’s usually better to keep them for beef or sell them for beef.

Most cows won’t agree to nurse two twin calves but those that do usually require up to 13 percent more energy to keep their body condition. Not to mention the extra suckling pressure they have to deal with. Consequently, such cows usually take a longer time to rebreed for subsequent seasons.

Thus, except a freemartin has been tested and found to be “normal”, she’s better off as beef.

However, if she’s among the less than 10 percent normal freemartins, then you can keep her just like any other normal heifer.

Conclusion: How to tell if a heifer is a freemartin

There you have it – how to tell if a heifer is a freemartin.

Carrying out a blood test is probably the most accurate way of identifying a freemartin heifer if you don’t want to wait till she’s old enough. Anyways, it’s better advice to spot them early and save yourself the extra cost and trouble.

While not all freemartins are sterile, most (or at least 90 percent) are. The best way to know is to have the vet test her. If she’s sterile, then I would probably keep her for beef. Selling her as a replacement shouldn’t be an option if you have the interest of the new owner at heart.

Can a Bull Breed His Offspring?